How to Charge a Deep Cycle Battery Properly

You get on the river, lake or open water to enjoy yourself. The last thing you need is to worry about whether your deep cycle battery will last the duration while you’re on the water.

Without a deep cycle battery, your outings aren’t going to get very far. This is because of they powerboat accessories, a trolling motor on a boat, or other items for people in an RV or camping out. They’re versatile that way.

The deep cycle marine battery is robust, but it needs taking care of at the same time. Here are some tips on how to charge it and maintain it too:

Unlike with most car batteries, a deep cycle type can take an 80 percent discharge and still get charged back up to 100 percent later. It also doesn’t tend to suffer memory loss where it loses its ability to hold a full charge either.

Ways to Charge up a Deep Cycle Battery

There are two main approaches to charging up a deep cycle battery. The first is to charge the battery while it’s on the boat already, in the fixed position. The second is to take the battery out of the boat and make use of a portable charging unit to top the battery up to full.

How to Go About Charging the Battery

Using the right type of charge for the battery is necessary to avoid damaging either the charger or the battery. Both aren’t cheap.

Hook up the supplied clamps by referencing the charger’s instructions and following them to the letter. Check the readout to see what charge level the batteries already have and how long they’ll take to load up.

The best method to follow with a portable battery charger is usually this:

Will a Trickle Charger Be Sufficient?

No. Trickle charges don’t deliver enough juice to charge up a deep cycle battery. At least 10-15 amps is needed for the job. Do not buy a trickle charger to attempt this. It won’t work, and you’ll waste your money.

How Can You Charge Up a Deep Cycle Battery in a Boat?

Check whether the charger you have is appropriate to connect to the electrical system on your boat. It needs to operate using power generated by the boat’s motor to work right.

The charge gets hooked up to the electrical system using the provided instructions for the charger. The charger shouldn’t overcharge the battery and will provide meaningful information about battery levels as it charges. A motor-powered charger often charges faster than one using a power outlet.

There are times when charging a battery quicker is desirable. This is possible to do by increasing the amperage charge up to 20 amps from 10-15 amps that it starts at.

However, be aware that this will most likely shorten the useful life of your deep cycle battery. It’s also possible to buy a charger that has improved circuitry to manage current in better ways for a faster charge without damaging the deep cycle battery in the process.

One way to reduce charging time is to only charge to 90 percent. This is because getting to a full 100 percent charge takes considerably longer and extends the charging time noticeably. However, don’t do this all the time.

Make sure you disconnect the battery from the boat before charging it. Use the right charger for the type of battery that you have. Consult the manual for the charger before you do anything. Use protective eyewear and rubber gloves to protect from discharge from the battery which can get in the eyes or on the hands and cause injury. Also, while speeding up charging is subject to the charger that you own, only charging to 90 percent saves time.

Best Stand Up Paddle Board 2020 Reviews 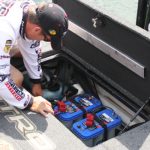 How To Charge a Trolling Motor Battery