Inflatable paddle boards usually are supplied with a hand pump. Depending on how good the pump is, it may (or may not) be the high pressure which determines how long it’ll take to inflate the paddle board before you can go out on the water with it. It can easily take 8-10 minutes to manually pump enough air into the board to be ready to take it out paddling.

It depends on how long you have on the water whether losing that ten minutes matters to you. For frequent paddlers, you’ll need to deflate the SUP every time and then re-inflate it again. If you’re going out several times a week to hit the water, it gets to be a real pain to have to stop to inflate your board for close to a quarter of an hour before you can get started. After a while, it just sucks quite honestly.

Enter, the electric SUP pump. This little number is great for inflating a SUP in a matter of minutes. If you’re part of a group of friends, it can pump air into each SUP in turn and save everyone a bunch of time and effort in the process. An electric pump takes all the hassle and lost the time out of the equation which leaves you more time on the water. Awesome!

Let’s look at a few of the better electric SUP pumps to see which one comes out on top.

The Sevylor 12 Volt 15 PSI SUP and Water Sports Pump supports air pressure up to 15 PSI to pump air in quickly and efficiently. There’s a useful auto-cutoff feature that prevents pumping too much air into the SUP when it’s already reached its pressure limit which will avoid bursting the inflatable paddle board for sure.

There is a range of options to connect to a boat, board or float. An extension hose allows air pressure to flow. There are also several valves including a pinch, Boston, Double Lock, and Mini Double Lock, so you’ll have no problem hooking up this electric pump to a variety of water-based equipment. 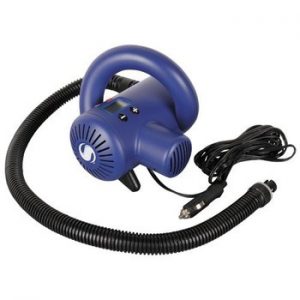 For people who brought their vehicle or portable generator along on the trip, the 12-volt connector plugs right into the power outlet. You’re also able to choose what measurement of pressure you’re adapted to, with KPA, PSI, and bar as options.

The electric pump on the Sevylor 12-volt pump is powerful enough to fully inflate a 10-foot long board in only 7-8 minutes. This is probably half the time it would normally take without an electric pump.

There is automation built into this model. You set it up, plug it into shore power and let it run. It will complete the pump-up process on its own and shut off automatically to avoid damaging the inflatable. This way, you can take it out first from the automobile and set it up to get pumping air while unpacking the rest of the gear in the meantime. Better efficiency!

A one-year warranty is also provided.

Pros
Electric heavy-duty SUP pump Automatic shut off safety feature when reaching the right PSI   Low-pressure hose extension provided   Four types of valves included connecting to many types of inflatables Weighs 3.5 pounds   Plug is 12-volt to connect to regular power outlet   Select unit measurements in mbar, PSI or KPA   1-year limited warranty
Cons
Extension hoses aren’t the best quality. Has a tendency to split at 7-8 PSI Hose should be replaced with a better quality one for any hardened paddleboarders

The Sea EagleBTP Mano Two-Stage Electric Turbo Pump is a compact pump system that’s not just designed for SUPs but also works with boats and inflatable kayaks too. Its compactness belies its power which allows it to complete a pump-up task in record time.

The Mano Two runs either using the supplies alligator clips to the car or RV battery or a suitable separate second battery option (many RVs now have solar panels and store power in battery banks which would work fine too). It’s possible to purchase a 12-volt battery and charge it periodically before taking a paddleboarding trip, but using a vehicle to supply electric power to this pump is the better option in most cases. 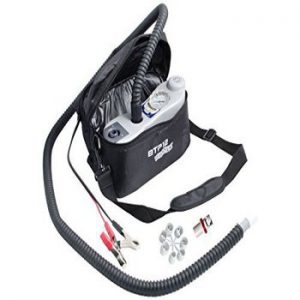 There is a standard adapter for the valve connection and also a few attachment choices to hook up to a few inflatables. Hopefully, you won’t get caught out with not having the right connection and in any case, it’s possible to buy other valve connections from third-party sellers. There’s also a six-foot hose too.

This is a two-stage pump. The turbine blower delivers low pressure to get the PSIs rolling along initially. The secondary stage is higher pressure and takes more time. It’s also a good bit noisier too. The maximum pressure stated as 15 PSI within just a few minutes.

There is an automatic shutoff feature to prevent bursting an inflatable. You can set the maximum PSI and then it will turn off when this pressure level is achieved. So, it has a “set it and forget it” mode.

There’s a handy bag supplied to pack it away after use and keep dust out.

Pros
Powerful electric SUP pump with enough juice to pump up a couple of inflatable boats   Add air to SUPs, boats and other inflatables   Runs from a car’s battery power using supplied alligator clips or connecting to a separate charge battery bought separately  Automatic shutoff based on maximum PSI setting   Two-stage pump system with a low-intensive blower and a high-intensity system to reach 15 PSI   Has valves and several adapters to hook up to a few different inflatable connections
Cons
Cannot receive power from a 12-volt power outlet   Reports of adapters coming apart quickly   Not robustly built so handle with care

The Tower Paddle Boards Electric Pump is a compact unit that will fit into the trunk of your vehicle quite easily. It only weighs 3 pounds which is quite light in this category too.Tower Paddle makes inflatable paddle boards but also their own SUP electric pump too which is uncommon.

For valve compatibility, it fits the Tower Paddle range of paddle boards just fine as one would expect. It is not fabulous when wanting to connect to a range of other inflatables including competitor SUPs. You’ll want to pick up some valve adapters separately if you plan to do that. 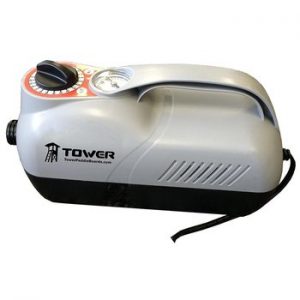 This electric pump either plugs into a 12-volt cigarette lighter inside a vehicle or to a car battery (alligator clips are supplied). There is no option to plug into a power outlet on a portable generator. The SUP runs and inflates the fastest when a vehicle is running.

The pump has a single stage that pushes a good amount of PSI into an inflatable quickly. This product is no slouch. It is a bit noisy as a result, but it pumps up SUPs quickly so we’re not complaining. The hose supplied avoids kinking in the line and has a nozzle at the end (H3 connection).

There is a pressure gauge to read the current pressure level. The maximum PSI is 15. The same auto shut-off feature is present here which runs well.

The Sea EagleBravo BP12 Single Stage Electric Pump almost looks like a portable defibrillator rather than the pump that it is. Fortunately, it does the job for a range of inflatable boats, SUPs, and kayaks.

The valve connection is a standard one and there are a few other options to hook up to different SUPs without difficulty. It’s unlikely that you’ll have connectivity issues here. 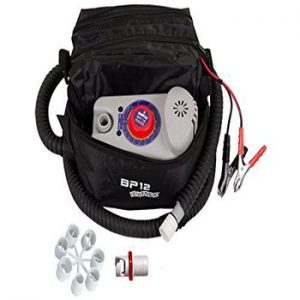 This is a single stage piston pump. It’s not noisy and has a good amount of pressure up to 14.5 PSI. There is a supplied hose that’s 6 feet long which should be plenty. The pump is high intensity, so it gets to the maximum pressure quickly.

The model is powered either via a separate 12-volt battery, but it also has alligator clips to hook it up to a vehicle of your choosing too. There is no power outlet hook-up option. It weighs less than 3 pounds and has its own bag so it’s easy to carry out of the trunk to where you need it.

Pros
Single stage piston pump   High pressure, low noise   14.5 PSI maximum   Connect to a 12-volt battery or use supplied alligator clips to hook to a car battery   Weighs under 3 pounds   Standard valve connection and adapters for other inflatable connections
Cons
Doesn’t quite reach the 15 PSI that most other pumps do   No power outlet connection   Seems to fail after a few uses with some batches   Can struggle to reach 14.5 PSI levels with a hand pump sometimes need to top off the last 2-3 PSI to achieve full inflated level

The Newport Vessels 12V Electric Pump is a quality brand that produces many pumps for the maritime industry. It is a no-nonsense product in appearance.

The connections are fine with the valve because it suits Halkey Robert fittings and other SUP connections too. It’s widely compatible which is a great thing for people with various inflatables to work with. 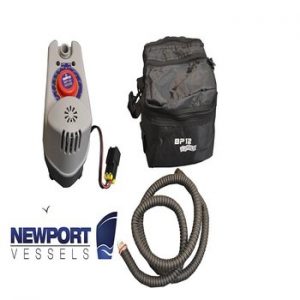 This is a single stage pump. It has a high-pressure setup that pushes air in efficiently to inflate a SUP in only a few minutes. The supplied hose is 6 feet long which is a typical length. It reaches up to 15 PSI, but getting to the 15 PSI level it struggles from 14 to 15.

The electric pump works only from a 12-volt battery which is not supplied. There is a 9-foot battery cable included to make it easier to hook it up. There are no alligator clips supplied with this SUP pump which differs from the other pumps that are battery powered in this SUP pump guide. They’ll need to be bought separately too.

There is an automatic shut-off feature. Just choose the PSI to match the inflatable you’re pushing air into and let it run on its own.

A carry bag is supplied too.

Pros
Quality marine brand   Hits 15 PSI   Requires a 12-volt battery connection to power it   Automatic shut-off feature   Single process motor   6-foot hose   Valve fits all Halkey Robert fittings   9 feet battery cable   Carry bag supplied
Cons
Doesn’t connect to a power outlet   Does not include alligator clips to connect to a battery, unlike all other products under review that require battery power   Doesn’t connect to all inflatables, but should hook up with most SUPs

With an electric SUP pump, it’s all about saving time and not hurting your back bending over to pump air into one or more SUPs. That’s what you’re paying for.

Very few SUP pumps connect to a power outlet. If that’s what you want, then it narrows your choices considerably. There are several products that either connect to a 12-volt cigarette lighter or more commonly to a car battery. Most products come with alligator clips and a bag to put everything into after use.

Watch the valve and other connectors because some pumps either don’t connect to all SUPs or won’t connect well with other inflatables. Some pumps are really only for SUPs and sometimes just to match their brand’s products. Paying a little more for a quality brand, better connections and durability is well worth it. 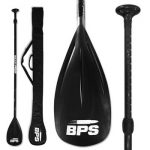 Best Stand Up Paddle Board 2020 Reviews